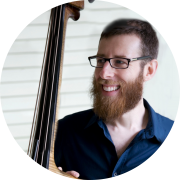 "a post-modern Milt Hinton, providing a powerful pulse that never flags"
Paul has a "sense of gravitas, melodic flair, rich timbre and unshakeable time"
- Paul Barton, All About Jazz

Award-winning bassist Paul has engaged audiences throughout North America, Europe, and Asia with his sonorous tone, assured confident pulse, and eloquent soloing. Originally from the West Coast, Paul is a first-call bassist in the Vancouver jazz scene, and he also made a substantial impact in Montréal, where he resided for 6 years. Paul is active as a performer, jazz composer and arranger, and educator. As It Happens, his debut recording as leader, features his lyrical original compositions that showcase his intuitive and interactive quintet. Paul also leads a trio (Paul Rushka's Present Past) with Jon Bentley on saxophones and Tristan Paxton on guitar, that performs music in tribute to, and inspired by Kenny Wheeler.

As a sideman, Paul is featured on over a dozen recordings, including those of James Danderfer, Chad Makela, Jillian Lebeck and Laura Crema, and has has performed with numerous jazz luminaries including John Taylor, Joe LaBarbera, Julian Priester, Jimmy Greene, Jeremy Pelt, Danny Grissett, Brad Turner, Ross Taggart, Kirk MacDonald, Kevin Dean, Denzal Sinclaire and many more. In 2003, Paul received a West Coast Music Award for Best Jazz Recording for his work on the Mike Allen Trio’s Dialectic. He has also been featured several times on CBC radio with live and studio recordings on Jazz Beat and Hot Air.