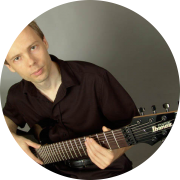 Precision and hard work can break anything

Alexey was born in 1980 in Vladivostok Russia, capital of the remote Primorsky Region (near the Japanese Sea). His first musical lessons began at the age of 7, when Alexey tried piano. However, The final choice of a musical instrument had been made at the age of 14, when Alexey took several guitar tutorials from his uncle. Never looking back, Alexey devoted all his time to guitar, with main influences such as Stratovarius, Yngwie Malmsteen, Joe Satriani and Steve Vai, Al Di Meola, Dream Theatre, Shadow Gallery, and the like.

Forging his guitar skills, Alexey included in his repertoire a variety of classical compositions and borrowed some Celtic music ideas.

In 2014, Alexey's album was nominated by the Western Canadian Music Alliance in the category 'Metal/Hard Music Recording of the Year'. Still, his main objective remains to achieve harmony of progressive and traditional styles.