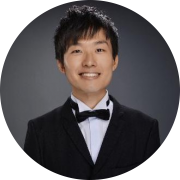 A native of Japan, Kimihiro is an emerging artist. Kimihiro was introduced as “young gifted pianist" in the press release of first recital at Galerie Colline, Edmundston, New-Brunswick, Canada. He began his piano studies at the age of twelve in Japan with Ms. Reiko Mizutani. He currently has finished a Master’s degree in Piano Solo Performance under the supervision of Professor Kyoko Hashimoto at the Schulich School of Music of McGill University. During his study at McGill, He has received the Yamaha Canada scholarship, the Ellen Ballon Piano Scholarship, Schulich School of Music Award in Memory of Jeffrey Campbell, and Lubka Kolessa Award. His former coaches include Elizabeth Dolin, Douglas McNabney, Claude Richard, Vladimir Landsman, Alain Desgagné Sanford Sylvan, Alexis Hauser, and Denys Bouliane.

Kimihiro's répertoire include wide range of styles from Baroque to contemporary music. Especially, he is a devoted performer of new music and has done several world / Canada / Montreal premiers. Certainly, he has obtained great experiences to share thoughts with and to play for living composers, such as Hideki Kozakura, Katsuhiro Oguri, Reiko Yamada, Kota Nakamura, Rikuya Terashima, Chris Harman, Alexandra Fol, Andrew Stewart and Alexander Raskatov. His Unsuk Chin’s “Fantasie Mechanique” with Maestro Jean-Michaël Lavoie has been broadcasted on Radio Canada.

Kimihiro has joined Odradek Records as one of Odradek Artists (Pianist and adjudicator) since December 2013. He has won a prize (distinguish) from IBLA GRAND PRIZE in Italy, 2014.