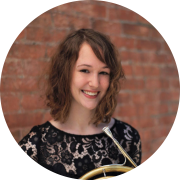 I am enthusiastic and passionate about music and I am thrilled to see the same enthusiasm in my students. I encourage musical enjoyment, personal expression, relaxed and healthy playing, strong fundamentals and a work ethic that will benefit my students in many ways - with the horn in hand or without!

Holly was born and raised in Manitoba, where she received her Bachelor of Music from Brandon University. She now holds a Master of Music from the University of British Columbia. Her primary teachers include Benjamin Kinsman of the Vancouver Symphony Orchestra and William Gordon. Holly received the award of Most Promising Performer in Any Area of the Brandon Festival of the Arts, and attended the Pacific Region International Summer Music Academy where she studied with Oto Carrillo of the Chicago Symphony Orchestra.