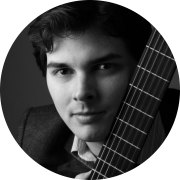 Originally from Brazil, André is beginning to distinguish himself on the Montreal artistic scene.
His musical education begins at the age of ten, at the Carlos Gomes Conservatory in Campinas. He obtains his Bachelor's degree at the Universidade Estadual de Campinas (2005) and his talent is crowned in Brazil by first prizes at the Eustáquio Grilo Guitar Competition (2008) in Brasilia and at the Guitar Competition of the Villa-Lobos Conservatory of Sao Paulo (2009). He also obtains several prizes and honourable mentions at the Vital Medeiros International Guitar Competition (2007), the Guitar Competition of Faculdade Cantareira (2008) and the IV Guitar Competition of the FENAVIPI (2009). In Canada, he receives third prize at the Grand Prix de Guitare de Montréal (2008). At the academic level, the National Council of Brazil for Scientific and Technological Development accords him an honorable mention for his research entitled "The harmony of 'Garoto' in his work for solo guitar (2005)".
In 2009, he receives his Master's degree in interpretation in classical guitar at the Université de Montréal under the supervision of Professor Peter McCutcheon and is seen playing with the Nouvel Ensemble Moderne (NEM). With the support of the Conseil des Arts et des Lettres du Québec and of the Canada Council for the Arts, he creates Platero et moi, a play for guitar and narrator, produced by Les Voyageurs Immobiles, an artistic company he cofounded alongside Milena Buziak and Sylvain Cornuau.
Together with flutist and composer René Oréa and percussionist Pablo Majlis, and a partnership with the Appassionata Ensemble and again the Conseil des Arts et des Lettres du Quebec, André presents during the year of 2010 workshops on Brazilian and Venezuelan music in 10 schools of the Montreal Island.
Rodrigues is also guitarist and director of the Lusitaniae Musica Ensemble that gathers together Ingrid Hollerbach on the harpsichord, Raphael Buratto on the cello, Danilo Bogo on the guitar as well as Filipe Batista, singer and presenter from Radio Ville-Marie.
He presents himself often as a soloist and a chamber musician, and he currently teaches at the Lambda School of Music and Fine Arts and at École des Jeunes at the Faculté de Musique of Université de Montréal.