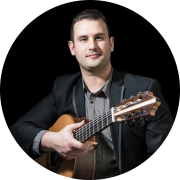 My teaching philosophy is based on giving students as much information as possible in a safe environment in which they feel motivated to learn. I recognize that each student requires a different approach, therefore I adapt to the needs of each one, always making sure that the knowledge they are acquiring is complete.
Usually during the classes we focus on rhythm, harmony, sight reading, technique, improvisation and the learning of different musical styles.

Acclaimed for his charisma and versatility, guitarist David Sossa has fascinated audiences internationally. As a soloist, David has performed in Japan, England, France, Italy, Spain, Canada, USA, Mexico, Cuba, Colombia, Chile and Ecuador. He is also a chamber musician, participating with other artists locally and internationally in both live and recorded performance. David holds a Master of Music degree in Guitar Performance from The University of British Columbia having received numerous scholarships throughout his studies and career.
David has recorded 2 full albums. The first one was a solo CD released in 2010, and the second one is an album for Saxophone and Guitar released in 2021. David has also participated in many other local and international recordings.
Since 2015 he has served as Head of the Guitar Department at the British Columbia Conservatory of Music.
Visit David's website for more info: www.davidsossa.com

*OFFERING ONLY ONLINE LESSONS AT THE MOMENT.

A minimum of 24 hours notice must be given to the teacher, of the student’s inability to attend a lesson in order for a makeup lesson to be considered.