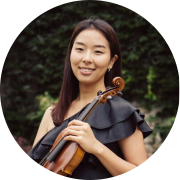 Jihye Joelle Kee has earned a Master of Music in violin performance at Cleveland Institute of Music and a Bachelor of Music from Eastman School of Music. She have been under the tutelage of Zvi Zeitlin, Paul Kantor and Atis Bankas.

Ms. Kee has been actively performing as a multi-faceted violinist throughout North America. She made solo appearances with Eastman Symphony and Korean-Canadian Symphony and won top prizes in Glenn Gould Chamber Music Competition and The Honor’s Chamber Competition. Summers were spent performing in festivals such as Music Academy of the West in Santa Barbara and Spoleto Festival in South Carolina, and held several years of fellowship at New World Symphony in Miami Beach. Then she moved to Halifax, Nova Scotia and served a couple of seasons as a member of Symphony Nova Scotia. She recently moved back to in her hometown, Toronto, actively performing and passionately teaching. She is a member of Toronto Messiaen Ensemble, regularly across North America.