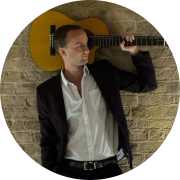 I always strive for my students to be as successful as they can. My teaching manner is friendly, informal, but structured and focussed. I guarantee within a few lessons you will feel like you are improving as a musician. I encourage all learning musicians to embrace all music. We will learn what you want to learn. I can prepare students for exams, auditions, performances, or if you just want to learn for fun then that's fine too!

Master of Music, The University of British Columbia, Vancouver, 2016

Tom Gamble is an award winning young musician who is rapidly gaining a reputation as an exciting and versatile artist. Born in the suburbs of London UK he began performing from age 13 where he was inspired and encouraged at a local festival held by famed Australian steel string guitar virtuoso Tommy Emmanuel. He quickly developed an impressive technique and understanding for music, arrangement and composition. Throughout his youth he continued to perform frequently often opening concerts for internationally renowned artists such as Martin Taylor and leading various ensembles and projects.

Tom studied at Trinity Laban Conservatoire of Music in London under tuition of Graham Anthony Devine. While at Trinity he was awarded first place in the “Gladys Puttick Improvisation Competition” adjudicated by Errollyn Wallen and Pete Churchill. He graduated in 2014 with a Bachelor of Music (with Honours) degree. Subsequently he was awarded a scholarship to continue his studies in Canada at the University of British Columbia under tuition of Dr Daniel Bolshoy. He graduated in the spring of 2016 with a Master of Music degree.

Tom was first prize winner at the 2016 Northwest Classical Guitar Competition in the USA. He gives regular solo and chamber concerts throughout Europe and North America. His playing has been described as “intense, exciting, spontaneous and engaging”.

Tom is also an active and busy composer and arranger of film, TV and library music.

Must have own instrument.