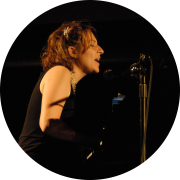 Michèle Raffaele was born and raised in Montreal, Canada. She started playing the piano when she was a child and a few years later was composing her first songs. As a teenager, she improvised in the hall of the Jasper Park Lodge in the Rocky Mountains in Canada. She then completed her degree in Piano Performance at McGill University where she also studied composition. Later, she became interested in vocal music and composed a song-cycle, setting 5 of Irving Layton’s poems to music. Her love for the Italian language and her desire to take classical voice lessons brought her to Italy where she still lives. Her first EP entitled “Minor Offender” was released in February 2013.