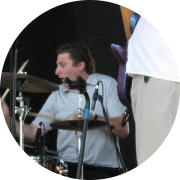 Anthony Giancola is a freelance drummer, percussionist, offline/online session drummer and educator located in Manitoba, Canada. He has toured and recorded with various artists and groups from around Canada, US and other parts of the globe.

Anthony Giancola, born and raised in Winnipeg Manitoba, Canada, has spent nearly his entire life performing. Originally starting off playing the piano at the age of five, performing regularly in churches and recitals, Anthony switched to drums and began his musical career as a drummer at the age of 13. It all began with performing at “all ages” shows with numerous bands, and it was not soon after he got recommended to work as a percussionist and drummer at Trinity Television Studios. Right out of high school, Anthony continued performing and now started touring with numerous bands/artists: Burnt Project 1, South Thunderbird Blues Band, Dave Weber (The Web), and with a ton of other great artists and musicians.

Currently Anthony Giancola is working with the World Village Gospel Choir (under the direction of Neil Weisensel), Segweh, and Canadian artist Chris Goertzen, whose highly anticipated album will be released in 2015. Anthony is also head instructor and owner of Groove Academy Music School in Winnipeg Manitoba.

Anthony is gearing up to launch is own project with original tunes in early 2015 in the realm of heavy nasty funk grooves and R&B. You’ll want to check that out.

Performed – Shared the stage with