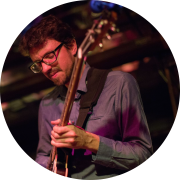 -Performed the Canadian debut of the recently formed classical music ensemble Trio Sol in Ottawa (2013).
-Multiple performances in important International Music Festivals in Toronto and Winnipeg such as: Brazilian Day Canada (2011 and 2012 Toronto) Folklorama (2012 Winnipeg), Toronto International BrazilFest (2011 and 2012), among others.
-Performed in Toronto’s most important jazz, classical music, and Brazilian music venues such as The Rex Hotel, Lula Lounge, Touché Martini Bar, The Royal Conservatory of Music’s Conservatory Theater, Humber College Theatre, among others.

With the group Dance Migration, Andre has toured a 90 min production through 26 different cities in the Netherlands as a music director, guitar, bass and piano player.

-Performed with Trio Brazuca in Mexico City’s famous Tepoztlán Hotel, and for a private event for the Canadian Embassy.

-Performed in important international music festivals, some with multiple appearances, such as: Winter Festival Campos do Jordao, Cunha Festival, Cajati Festival, Sao Luis do Paraiting Festival, the José dos Barreiros Festival, among many others.
-Performed in Brazil’s most important music theaters and venues such as: University of Souza Lima in São Paulo, Auditorium of the Sala São Paulo, the FAAM Auditorium, The Latin American Memorial Auditorium, and SESC Vila Mariana and Campos in Rio de Janeiro.

Brazilian multi-instrumentalist André Valério is in high demand as a guitarist, composer and arranger. Mr. Valerio’s versatility has taken him around the world to perform in important music festivals and venues in Canada, the Netherlands, Mexico and Brazil. His interest in music began at a very young age after listening to Brazil’s most enduring musical genres, Bossa Nova. Inspired to compose and arrange since as a teenager, André took a strong interest for classical music and jazz among other styles, passion that lead him to learn his six instruments: acoustic guitar, piano, mandolin, cavaquinho, bass, and electric guitar.

André is currently working on his new album with all his original tunes, which are mostly written with traditional Brazilian rhythms such as samba, baiao and maracatu. His first CD was released in 2009 in Brazil called Feijao de Corda, it was a 5 piece band and André was the guitarist and one of the composers. For the new album, André will be the leader of the band, which is the same group that he’s been playing in the past four years in Canada. After that time together his band sounds unique and tight.

André started his musical studies at twelve years of age with guitar professor William Gomes in his hometown, Guarulhos – São Paulo. Shortly after that, Valério was admitted into one of Brazil’s most important music schools (EMESP) where he studied with professor Olmir Stocker, the most well-respected Brazilian guitar player with an authentic Brazilian sound. As part of his musical background, André completed his studies in performance, theory, harmony, counterpoint and choral conducting in multiple institutions, and studied improvisation, piano, cavaquinho mandolin and bass with internationally renowned professors such as Evaldo Soares, Aldo Landi, Reg Schwager, Geoff Young, Nathan Hiltz and Tico Souza. His passion for teaching and education lead him to complete a Pedagogy degree from the University of Guarulhos in São Paulo, where he acquired the knowledge to develop his versatile teaching techniques.

André is currently finishing his studies in guitar performance at Canada’s Jazz leading academies, Humber College. In Canada, André has been the musical director for the group Dance Migration, which was on tour with 25 shows around Europe last year. He is also the arranger for Flavia Nascimento’s songs and concerts. Flávia Nascimento is a Brazilian artist who began her career as an actress and singer touring Brazil in musical theatre productions. She moved to Quebec City in 2001, her base ever since for travel throughout Canada for concert performances, street festivals and benefit shows, while also leading various bands. André is the musical director of her band called ‘Smallest Big Band’ and together they won the Stingray Rising Stars Award during the Mundial Montreal festival in 2015. André has composed many different style of songs for Flavia, specially “forró, a very traditional Brazilian rhythm originated in Northeastern Brazil. It takes off from various folk dance styles and beats and enjoys widespread popularity all over Brazil. Among all his original work, André has been teaching and playing in festivals and bars around many cities in Canada.