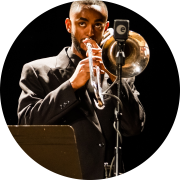 I believe that a teacher should inspire their student's drive to improve, and imagination to create.

Nebyu is a trombonist, composer, and arranger currently residing in Toronto, ON. He has been playing trombone for 8 years and has the pleasure to play alongside world-class musicians, such as Martha Reeves, Michael McDonald, Joe Lovano and Donny McCaslin, to name a few. He is also a recent graduate of the Bachelor of Music program at Humber College, studying under Canada's top-tier musicians, such as Alastair Kay, Kirk McDonald, Pat Labarbera and Mark Kelso.

Nebyu plays frequently within, and outside of Toronto, playing in various styles such as jazz, R&B, funk and pop, and also leads his own group called Nebyu Yohannes Group (NYG). NYG plays in the style of contemporary jazz, drawing inspiration from groups like Brian Blade and the Fellowship Band, and Ambrose Akinmusire, all while containing original compositions and arrangements written by Nebyu.