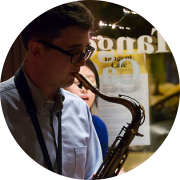 My teaching philosophy has always been to teach for the students. To embrace tradition and necessary technique while focusing on the particular goals, interests, and learning styles of each student.

My students have consistently achieved. From first place prizes in festivals, to higher grades in band and music classes, to successful auditions at competitive post-secondary institutions,

John Nicholson is a saxophonist located in Toronto. Growing up in Surrey, British Columbia, John began playing saxophone in high school. John graduated from Capilano in 2014 with a Bachelor’s Degree in Jazz Performance. There, he studied and played with Canadian jazz luminaries such as Brad Turner, Steve Kaldestad, Bill Coon, Dave Robbins, and Ihor Kukurudza. While attending Capilano University’s Jazz Program, John played in Brad Turner’s “A” band for three years as a featured soloist, regularly selected for performances and workshops with guest artists, including Jason Marsalis, Dave Liebman, Mike Murley, Gary Smulyan, and Ian Froman. During this time, John was also active in the vibrant Vancouver jazz scene, building a reputation as one of the city’s top emerging saxophonists.

Months after graduating, John moved to Toronto, where he has quickly become known as a strong and versatile saxophonist, playing with many of the city’s top musicians. John currently performs around Toronto with his own jazz groups, as well as actively as a side musician and as a member of the popular Kim and Company Dance Band. John is currently pursuing a Master’s Degree in Jazz Performance at the University of Toronto.