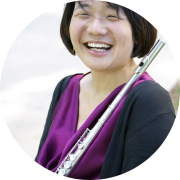 Recent competitions she has won include the UW-Madison concerto competition in 2014 and the 6th annual Irving Shain woodwind and piano Duo Competition with Kirstin Ihde in 2012 and Taipei National University of the Arts Soloist Competition Concert in 2010 at Taipei, Taiwan. In Madison, Mili performs in many chamber groups including the Collegium Musicum, Helios Quintet, Sheboygan Symphony Orchestra and the UW-Madison orchestras.

A native of Taiwan She holds a MM from Taipei National University of the Arts and BM from National Taiwan Normal University, which she earned in 2011 and 2007 respectively. Mili's flute teachers have included Jinny Hwei-Jin Liu (a graduate from Manhattan school of music) and Li-Man Sung (Koninklijk Conservatorium Brussel). With the wide range interests from early 17th century music to jazz, Mili believes that music speaks in any kinds of genre and form.

A committed music educator, Mili is a frequent coach at the Wisconsin Youth Symphony Orchestra chamber program, and was a sectional leader of band orchestra and coach of woodwind quintet at Daan Junior High School band orchestra at Taipei.