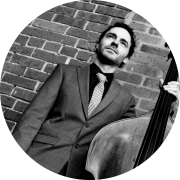 Victoria B.C. bassist Tim has toured much of the country and has played everything from cruise ships to concert halls.
Since arriving on the west coast in 2010, Tim has been very active and can be found playing nearly every week anywhere between Port Hardy and Victoria. He has performed in numerous festivals, including: The Victoria Djangofest, The Victoria Jazz Festival, The Rifflandia Festival and The Montreal Jazz Festival.. He has also had the privilege of sharing the stage with such great artists as: Kid Koala, Daniel Lapp, Phil Dwyer, Donny McCaslin, Denis Chang, Marc Atkinson and Quinn Bachand.
As an educator Tim has taught theory and been a peer tutor as well as lectured in jazz appreciation classes, all at the collegial level. He has also taught at numerous music camps in Canada and the US. He is on currently on the jazz faculty at CYMC, one of the leading and longest running music camp's in Canada, located in the Comox Valley, B.C.
As well as teaching privately Tim is employed as a music teacher for SD62 in Victoria, BC.