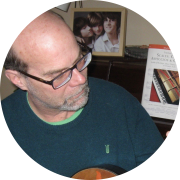 To teach guitar to people of all ages in a fun and relaxed atmosphere. For students to achieve their personal goals in learning and playing the music they enjoy. For students to discover the many styles and facets of playing guitar.
For students to feel comfortable playing for an audience and making music with others as these may be goals to achieve.
Past students have become good performing guitar players and also bass guitar players in rock and pop groups.
All students learn more about guitar and also to understand ,read and write music.

Have been playing guitar since as a child in 1971. Started playing popular folk and country songs. Moved on to playing blues and rock tunes before studying classical and jazz guitar at McGill Conservatory and at Universite de Montreal. Received bachelors general music degree from said University in 1988. Studied at UQAM and obtained music education degree in 1992. Have been teaching regularly since 1982 private lessons and semi-private. Also have been playing music solo guitar and with small groups for audiences in restaurants, receptions, small venues, seniors homes, wedding ceremonies, etc. In the 1980's and 90's was founding member of original Jazz-Blues-Rock group 'Blind Camel' and from 2004 to 2009 the Johnny Cash tribute band 'The Long Shadows'

lessons can be held at my studio place or at students home.
important for all to be on time and to notify in advance about any schedule changes.