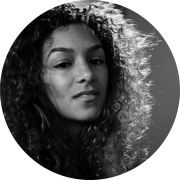 Lina is a singer/songwriter from Montreal, Canada. Growing up, Lina was exposed to music through her aunt who was the head of her church’s choir and her father who was heavily into Jazz. This proved to have a profound influence on Lina’s passion and dedication to music, who as a young girl was inspired by the works of Billie Holiday, Nina Simone and Whitney Houston. At 18, Lina moved to Los Angeles to attend The American Academy of Dramatic Arts where she began her musical studies. Throughout college Lina participated in many local community plays and musicals, most notably starring as Sarah in the award winning musical Ragtime.

After leaving AADA she moved to New York to pursue a solo career. She is currently putting the finishing touches on her debut EP.