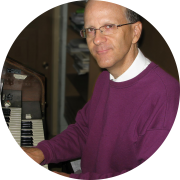 As music teacher, I had prepared students for the Royal Conservatory of Music examinations, and many of my students achieved honours and first-class honours standing.

Thomas has been teaching piano, organ and theory since the 1980s in Canada. While teaching students as a bona fide teacher in Vancouver, he was studying for the Royal Conservatory of Music examinations until he earned his ARCT diploma in piano teaching in 1988. He also held numerous organist posts in Vancouver from 1979 to 1999. Since moving to Toronto in 1999, Thomas became organist and choir director at Asbury & West United Church in Toronto. Currently, he is organist and choir director at Woodbridge United Church in Vaughan since 2011, and has also taught students in the Toronto area.

I only travel to student's home to teach music, the practice I have been doing in Toronto. I usually teach students from the age of 7 years and up, including youths and adults.